Happy Thursday, all! Today I am super excited to share my review of an alluring and haunting ghost story, The Broken Girls by Simone St. James, in celebration of its paperback release from Berkley Pub!

The Broken Girls started off with a bang and with a dynamically engaging prologue! Was there a ghost right from the start?

If you think you do not enjoy ghost stories, I have to say, this one is executed well. Spooky is done with a light hand, not overdone, even feasible if that’s possible for a ghost story?! The atmosphere is perfectly staged with an old school building featuring “tooth-shaped windows.”

In Vermont in the 1950s, there’s a home for wayward “throw-away” girls at Idlewild Hall. The local town has rumors that Idlewild is haunted. Four girls are sharing a room, and they forge a deep bond that continues to grow until one friend disappears.

Also in Vermont, but in 2014, Fiona Sheridan is a journalist obsessed with events around her sister’s mysterious death. Twenty years prior, she is fond in the fields of Idlewild Hall.

It turns out that Idlewild is being restored by someone who does not want to be named, and Fiona decides to write a story about it. Fiona discovers something that links her sisters death to other secrets…and something you’d never expect.

Told in dual story lines, past and present, that later converge, I found the past timeline slightly more interesting, which featured a boarding school in Vermont for “wayward” girls in the 1950s. I enjoyed the present storyline with Fiona, too, but the former held me captive. The girls in the school were each so interesting and likable.

Overall, this was a well-written, atmospheric, spooky ghost story, and one I enjoyed immensely. It’s the perfect read for this time of year, to cozy up with a blanket and fall into a story.

Thanks to Berkley for the complimentary ARC. All opinions are my own.

Vermont, 1950. There’s a place for the girls whom no one wants–the troublemakers, the illegitimate, the too smart for their own good. It’s called Idlewild Hall. And in the small town where it’s located, there are rumors that the boarding school is haunted. Four roommates bond over their whispered fears, their budding friendship blossoming–until one of them mysteriously disappears. . . .

Vermont, 2014. As much as she’s tried, journalist Fiona Sheridan cannot stop revisiting the events surrounding her older sister’s death. Twenty years ago, her body was found lying in the overgrown fields near the ruins of Idlewild Hall. And though her sister’s boyfriend was tried and convicted of murder, Fiona can’t shake the suspicion that something was never right about the case.

When Fiona discovers that Idlewild Hall is being restored by an anonymous benefactor, she decides to write a story about it. But a shocking discovery during the renovations will link the loss of her sister to secrets that were meant to stay hidden in the past–and a voice that won’t be silenced. . . .

Check out these reviews by the other Book Besties:

Berit at Audio Killed the Bookmark

Have you read The Broken Girls, or is it on your TBR? Do you have any favorite spooky reads? Happy Reading! ~ Jenni THR 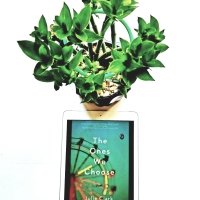