Welcome to my stop on the The Poppy Wife blog tour sponsored by TLC Book Tours! Thanks to TLC for the invitation!

The Poppy Wife is set during and after World War I, the Great War. Edie’s husband, Francis, is missing and presumed dead after the war, and his brother, Harry, is present the day Francis went missing.

Both Edie and Harry believe Francis is still out there, and each seeks to find him. Harry goes by his work, traveling to take pictures of soldiers’ graves, while Edie embarks on her own journey. Their paths are about to intersect, and will they find news of Francis?

The aftermath of a war and its impact on the loved ones of those who are lost are captured in such an authentic and powerful way. The storyline is pierced masterfully together, and that lent itself to some great underlying tension. I enjoyed the literal and figurative journeys this book was, both for the reader and for Harry and Edie.

Overall, The Poppy Wife is a beautifully-rendered, emotional story of the lessons we can learn from war and how to find hope and healing in even the darkest of times.

About The Poppy Wife

In the tradition of Jennifer Robson and Hazel Gaynor, this unforgettable debut novel is a sweeping tale of forbidden love, profound loss, and the startling truth of the broken families left behind in the wake of World War I.

1921. Survivors of the Great War are desperately trying to piece together the fragments of their broken lives. While many have been reunited with their loved ones, Edie’s husband Francis has not come home. Francis is presumed to have been killed in action, but Edie believes he might still be alive.

Harry, Francis’s brother, was there the day Francis was wounded. He was certain it was a fatal wound—that he saw his brother die—but as time passes, Harry begins questioning his memory of what happened. Could Francis, like many soldiers, merely be lost and confused somewhere? Hired by grieving families, Harry returns to the Western Front to photograph gravesites. As he travels through battle-scarred France and Belgium gathering news for British wives and mothers, he searches for evidence of Francis.

When Edie receives a mysterious photograph of Francis, she is more convinced than ever he might still be alive. And so, she embarks on a journey in the hope of finding some trace of her husband. Is he truly gone? And if he isn’t, then why hasn’t he come home?

As Harry and Edie’s paths converge, they get closer to the truth about Francis and, as they do, are faced with the life-changing impact of the answers they discover.

Artful and incredibly moving, The Poppy Wife tells the unforgettable story of the soldiers lost amid the chaos and ruins, and those who were desperate to find them.

Please use the hashtag #thepoppywife, and tag @tlcbooktours and @williammorrowbooks. 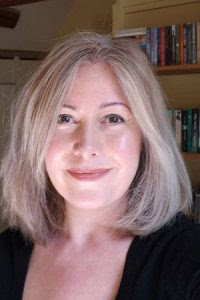 Caroline Scott is a freelance writer and historian specializing in WWI and women’s history, with a PhD from Durham University. Born in the UK, Caroline currently resides in France. The Poppy Wife is partially inspired by her family history.

Have you read The Poppy Wife, or is it on your TBR? Happy Reading! ~ Jennifer THR