Welcome to my stop on Salt the Snow by Carrie Callaghan blog tour hosted by Historical Fiction Virtual Book Tours! I have a review and giveaway for you so make sure to read all the way to the bottom to check it out.

I love stories of strong women, and Salt the Snow features a war correspondent, Milly Bennett, an American journalist who has covered newsworthy tragedies in San Francisco, Hawaii, China, and now, with Salt the Snow, she arrives in 1930s Moscow.

Milly’s husband is Russian, but that doesn’t keep him safe from the secret police. She tries to get him released, but instead, secret after secret flies out about her marriage and also the Soviet Union.

When Milly is called to a new “assignment,” she has to decide what is right regarding her husband.

Milly is a fabulously formidable main character. You can’t help but love her and be inspired by her heart. The author brings the setting and time period to life. I even felt the bitter cold.

Milly was a real woman, and I’m so grateful Carrie Callaghan shined a light on her story, one I’ve never been taught or read about before, one that would have likely been lost to history like those of so many other strong, trailblazing women.

I received a complimentary copy. 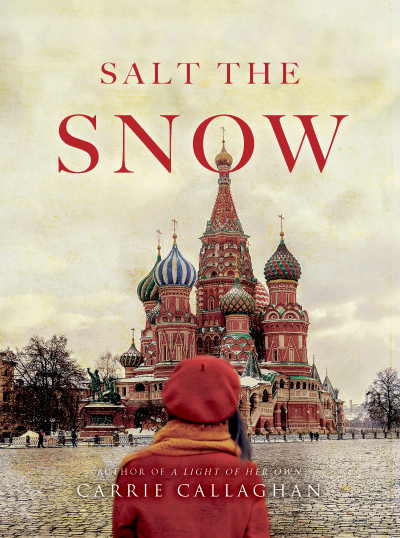 Salt the Snow
by Carrie Callaghan

American journalist Milly Bennett has covered murders in San Francisco, fires in Hawaii, and a civil war in China, but 1930s Moscow presents her greatest challenge yet. When her young Russian husband is suddenly arrested by the secret police, Milly tries to get him released. But his arrest reveals both painful secrets about her marriage and hard truths about the Soviet state she has been working to serve. Disillusioned and pulled toward the front lines of a captivating new conflict, Milly must find a way to do the right thing for her husband, her conscience, and her heart. Salt the Snow is a vivid and impeccably researched tale of a woman ahead of her time, searching for her true calling in life and love.

â€œThe vivid prose of Salt the Snow sets the reader in the middle of socioeconomic upheavals and political unrest with the best possible tour guide, wisecracking American journalist Milly Bennett. Callaghan excels at bringing little-known real-life women out of the darkness of historical obscurity and into the light of recognition. From the first scene, the reader is plunged into a world of suspense and intrigue, led by an unforgettable protagonist. Milly is not so much a character as a fully realized, complex human being: her brilliance and self-sufficiency are admirable, and her loneliness and feelings of unworthiness are heartbreaking. A fascinating novel!â€ â€”Clarissa Harwood, author of Impossible Saints and Bear No Malice

â€œA vivid, well-researched story of a complex and ahead-of-her-time woman, an American journalist, who finds herselfâ€”head and heartâ€”while living and working in an equally complex Russia.â€ â€”Jenni L. Walsh, author of Becoming Bonnie

â€œSalt the Snow is a vivid journey through the kaleidoscope of 1930s Europe with an irrepressible and all too human guide in Milly Bennett. Donâ€™t miss this book and its unforgettable heroine!â€ â€”Linnea Hartsuyker, author of The Half-Drowned King and The Golden Wolf

â€œHonest, vivid, and bold in the face of historical truths, Salt the Snow is a captivating story of a woman whose vulnerability and hopeful idealism resonate even today.â€ â€”Jennifer Klepper, bestselling author of Unbroken Threads

Carrie Callaghan is a writer living in Maryland with her spouse, two young children, and two ridiculous cats. Her short fiction has appeared in Weave Magazine, The MacGuffin, Silk Road, Floodwall, and elsewhere. Carrie is also an editor and contributor with the Washington Independent Review of Books. She has a Masterâ€™s of Arts in International Affairs from the Johns Hopkins School of Advanced International Studies, and a bachelorâ€™s degree from the University of North Carolina at Chapel Hill.

For more information, please visit Carrie Callaghan’s website and blog.Â You can also connect with her on Facebook,Â Â Twitter and Goodreads.

Monday, January 13
Review at Gwendalyn’s Books
Review at Tales from the Book Dragon

Tuesday, January 14
Review at Let Them Read Books
Review at Books In Their Natural Habitat

Saturday, January 18
Review at @gatticus_finch
Review at Reading is My Remedy

Thursday, January 30
Review at Passages to the Past

Friday, January 31
Interview at Passages to the Past

During the Blog Tour, we are giving away two signed copies of Salt the Snow by Carrie Callaghan! To enter, please use the Gleam form below.

â€“ Giveaway ends at 11:59 pm EST on February 5th. You must be 18 or older to enter.
â€“ Paperback giveaway is to the US only.
â€“ Only one entry per household.
â€“ All giveaway entrants agree to be honest and not cheat the systems; any suspicion of fraud will be decided upon by blog/site owner and the sponsor, and entrants may be disqualified at our discretion.
â€“ The winner has 48 hours to claim prize or a new winner is chosen. 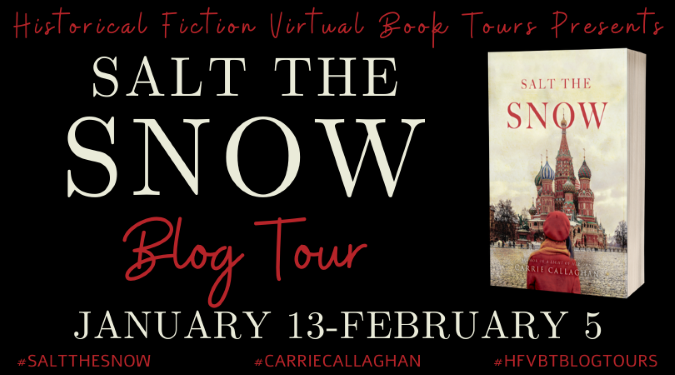 Have you read Salt the Snow, or is it on your TBR? Happy Reading! ~ Jennifer THR